Henry Bright was born in Sheffield in 1817, where his father Isaac and uncle Philip, were in business as Goldsmiths. Mr Isaac Bright opened a shop on the Parade in Leamington Priors 1831, – one of the first in the New Town, where he traded until shortly before his death in 1849. Mr Isaac Bright was remembered for the wonderful knife displayed in his shop window, said to have 100 blades. Rumour had it that the first boy who could open and close all the blades without cutting himself would be given it as a prize.

Henry Bright came to Leamington at the age of thirteen, and he and his brother Edward eventually became partners in their father’s business, which Henry continued to manage until his own retirement in 1885.

Henry Bright was not just a tradesman: for over forty years, always strenuous in either opposition or advocacy, he was actively associated with every aspect of local public life, becoming a member of the Board of Health, an Alderman, and later a JP. He served as Mayor three times. He was a Guardian of the Poor, and after twenty years’ service on the Board, was elected Chairman of the Provident Dispensary. He laid the foundation stone of the new Town Hall in 1882, and subsequently presented the clock in the tower, which, it was claimed, “by an electrical invention of Mr Bright”, was connected to all the rooms of the Town Hall, to keep all the building’s clocks synchronised.

Henry Bright remembered Leamington from his arrival in the town at the age of 13, when there were only 6000 inhabitants, the Parade was undeveloped and Bath St and High St were the chief centres of business.  He was an ardent admirer of the beauties and natural resources of the Spa and spent his retirement in scientific studies and research, especially into electricity and geology.  But his outspokenness and forthright views apart, he is best remembered for his untiring effort to reform the drainage system and improve Leamington’s domestic water quality, running a positive crusade against the pollution of the River Leam.

Until 1870, the town was dependent on river water for its domestic supply, through the offices of Mr John Oldham at the Mill. Henry Bright worked tirelessly to bring a better water supply to the town, securing the support of Alderman Wackrill and other influential members of the Board.  A trial bore near the sewage works produced ” quite brackish” samples, much to the amusement of those in favour of the river water supply.  Henry Bright had engaged the services of Professor Ramsey of the School of Mines, who went on to suggest a trial at a spot on the Campion Hills, which proved encouraging from the start.  The local authority then began operations on a much larger scale, – with great success. Two shafts were sunk to a depth of 100 feet, 50 feet apart and linked by an adit, eventually producing over 600,000 gallons of water a day. The foundation stone of the waterworks engine-house was laid by Henry Bright in September 1877, and the water works themselves were completed and opened in March 1879.

A former business colleague, Mr R S Roberts, said of Henry Bright that as far as the water supply was concerned, he was “in it with both feet.” For almost a decade, from November 1870 until the opening of the waterworks in 1879, Henry Bright apparently had in his shop a miniature museum of “water babies” from the river supply, which was added to from time to time. The museum included a small fish bottled in spirit, taken from a water pipe, reputedly in Clarendon Square, several pieces of service pipe with red-brown deposits of river mud, etc. The obvious difficulty was that under normal conditions, Leamington water passed muster, but at others, such as flood-time, the filter beds were out of action and the public was served with a nasty mess which was a real menace to the well-being of the town.  Various schemes were put forward and in all of these measures, Aldermen Bright, Bishop and Bradshaw (aka the ” three Bees”) worked closely together.

However, no matter how he worked to support good causes, Henry Bright was not universally admired: when he first proposed the bore hole, he was thought to be out to destroy the town’s reputation as a spa. In September 1873, he was accused in a Leamington Courier editorial of having “wonderful power of indiscriminate assertion” and of making a violent attack on the town water, –  and moreover had ignored the Courier’s advice to improve filtration and install new settling and storage tanks.  The editorial concluded, “He has been the means of frittering away the reputation of the town.  He has done it incalculable injury, and the only thing he can show is the bore hole.”

Henry Bright was certainly the prime mover in improving the supply, but it was his opponent Mr Harding (during his term as Mayor) who eventually turned on the new supply in 1879.  A number of people felt strongly that Henry Bright should be better recognised for his achievement, and accordingly, set up a public subscription fund, which raised £200 (around £12,000 today). The Bright Obelisk, (complete with a drinking fountain fronting the Parade,) designed by John Cundall and built of granite by John Fell, was erected in December 1880, but it was not all plain sailing, –  quite apart from bitter criticism in letters to the press from river-water afiçionados about “Bright’s Baby” wasting £30,000 of public money, and the scathing editorial in the Courier, the erection of the obelisk occasioned a lawsuit: local landowner William Willes sought to prevent its completion, contending that his predecessors’ gift of the land in Holly Walk to the town meant only the surface of the ground, and that by digging under the surface to install the obelisk, the Corporation had exceeded their rights. An Injunction was granted, then overridden on appeal by the Master of the Rolls, who gave judgement against Mr Willes on the grounds that the authorities were justified in going as far beneath the ground as they would for the installation of sewers. 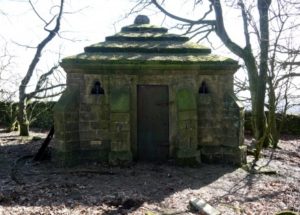 In old age, Henry Bright suffered ill-health, but continued to attend Committee and other meetings when not indisposed.  He died at his home, 5 Holly Walk, in 1904 after a short illness. Following a brief funeral service, the cortege left Holly Walk for the railway station to begin Alderman Bright’s last journey to Perry Barr, Birmingham for cremation, according to his expressed wishes.  He was accompanied not only by a large number of family members from far and wide, but also by many fellow businessmen, townspeople, his fellow Councillors, the Fire Service and the Police. His ashes were returned to Sheffield to be buried in the family mausoleum (pictured left.)

Henry Bright came from a well-established Jewish family from Sheffield. He married Doncaster-born Maria Bright in Doncaster on 31 July 1844.  They had a son, Walter William in 1848 and a daughter Agnes in 1851. Agnes remained unmarried, living with her father and Constance, a cousin from Sheffield at Winton House, Holly Walk.  Maria and Walter predeceased Henry, and their ashes were also buried in the family mausoleum in the Jewish Cemetery at Rodmoor in the Peak District.  Sadly, The Jewish Chronicle reported in 2012 that the cemetery had been vandalised and amongst others, the Bright mausolea demolished, –  by a local builder who used the stone to extend his house.

The engine-house foundation stone and a commemorative cast-iron plaque are now sited at the Campion Hills Water Treatment Works in the care of Severn Trent.