The Lights of Leamington

Lights of Leamington: Plan of Gardens

Following the Festival of Britain in 1951, for a whole decade, Royal Leamington Spa and Jephson Gardens became THE autumn venue for hundreds of people from all over Britain. Thousands of coloured electric lights transformed the Gardens into a wonderland for both children and adults. In August and September each year, the streets of the town were jammed by buses, coaches and cars as they dropped off their eager passengers.

A brochure of the time promised live music, dancing, open-air ballet, variety shows in the Pavilion and fireworks. A headline from The Morning News in 1952 cited an astonishing 300,000 visitors who flocked to the town, over 20,000 of them on Saturday 28th August. Among the visitors one year was current Green Spaces Officer Jon Holmes, who came over from Kenilworth with his mother, to queue at the Lodge to get in. A postcard dated 1953 stirred fond memories for LHG member Frank James, who was an apprentice electrician at the time. He was paid a small allowance to use his own transport (- his bike!) to get to the Gardens to help install the lamps, but along with his colleagues, was not allowed to use the main entrance. Workmen had to use the small side gate between South Lodge and the river, away from public view. One of the jobs assigned to Frank was the installation of lighting in the magnificent cedar tree overlooking Willes Road, which he did by climbing a series of 6” nails hammered into the trunk, all the way to the top. Doubtless, the ‘ladder’ is still in place, – though it is highly unlikely that anyone would now be allowed to follow Frank’s example of 60 years ago, to find out. 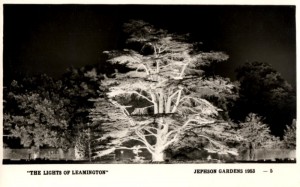 Lights of Leamington: The Cedar Tree

The electrical crew were provided with a punt, so that after the Saturday firework display, they could cruise the river to retrieve the rocket sticks, which had all been carefully targeted at the river, – to hand them over to the gardeners at the glasshouses for use as pea sticks. Recycling is certainly not new.

Lights of Leamington: The Three Js

Another of Frank’s memories concerns “The Three Js”, Jay, Janet and Jackie, – three young variety artistes set to perform at the Pavilion one evening. They turned up at performers’ entrance, the gate on Newbold Terrace, only to find it locked. Gentleman Frank helped them over the railings so that they could complete their engagement ……….. and has never forgotten the experience! As the numbers of visitors rose year on year, so did all the attendant costs: installation, maintenance, policing and the inevitable toll on the Gardens themselves. There were also increasing problems with parking and late night rowdiness, so on Sunday 8th October 1961, the illuminations closed for the last time. Frank Cridlan, then owner of the Regent Hotel, tried to revive the Lights in 1988. Although the plan had a great deal of support locally, costs proved prohibitive, – but people like Frank still have wonderful stories to tell.

Lights of Leamington: The Fountains