It is almost certain that Daniel Goodman Squirhill was born in 1809 in (Fenny) Stratford in Buckinghamshire, although he was recorded as being born a year earlier in the village of Nobottle in Northamptonshire by Toby Cave. His father, Charles, is said to have designed parts of Lighthorne church in 1808.

He studied at the Royal Academy school in Piccadilly, London, from about 1829. In that year he had an entry in the Royal Academy Exhibition Catalogue for ‘A design for an ornamental seat in a public garden, D.G.Squirhill’.

By 1834 Squirhill was a member of the partnership of Moore & Squirhill, land agents in Warwick, and he soon became a surveyor on his own based in Orchard Street in Leamington by 1835; this street was between Bath Street and Bath Place and was later obliterated by the building of the railways. The name  of his partner persists in Warwick in the law firm Moore and Tibbitts in Warwick which claims a 185 year history (this neatly equates to foundation in about 1836). Squirhill was to become notable for several activities in the town including a role as a Commissioner and then as a surveyor as well as an architect. In 1835 he was involved with a property in Harriet Street; this was a street at the back of what is now Spencer Street and has become the diagonal part of Spencer Yard. In 1839 he was living at No 7 Hamilton Terrace and by 1840 he was based at Eaton Villa, St Mary’s Road. In 1841 he was listed as a ‘surveyor’, living in High Street, Leamington Spa; it should be noted in explanation that Eaton Villa is at the corner of Radford Road which was often known as High Street at this date. In 1851 he was listed as ‘Architect’ and was still living at Eaton Villa in St Mary’s Road with wife Louisa, sister-in-law Lavenia Greams, one daughter Jeannet aged 12, a pupil (Charles W Smith) and three servants (including a groom). It has not yet been confirmed whether or not Squirhill designed Eaton Villa.

The 1861 census shows that the family members, Daniel, Louisa, Lavinia and Jeannet, were living at 1 Westbourne Park in Paddington, London, with two servants. He is shown as having ‘no occupation’, suggesting that he had retired, but he clearly was comfortably off. He died in Kensington, London in 1863, aged about 54. Louisa, his wife, died on the 10th June 1872 in Buckinghamshire.

Daniel, an Architect in Leamington Spa

Daniel was active as an architect in Leamington Spa from about 1835 to 1857 (note that, occasionally, he is incorrectly named as David in a few sources). It is very noticeable that he adopted numerous styles of architecture throughout his years in Leamington.

In 1838 he submitted two plans for enlarging Victoria Bridge (neither was implemented) and in the following year he designed the Dale Street bridge (later named Adelaide Bridge when Adelaide Road was laid out); this was built at this date with Warwick and Tixall stone; there was a dispute about this new bridge affecting the ongoing work back upstream at Oldham’s Mill and at Victoria bridge; this Adelaide bridge was demolished and replaced by a cast iron version in 1891 designed by William de Normanville; this was itself rebuilt in steel in recent years.

In 1839 he was building at least one house in Dale Street and in the following year he took on a new role, acting as secretary to both of the town’s markets at Prince’s Market in Abbott Street (on Tuesday and Friday) and Covent Garden (on Wednesday).

He probably designed several houses near St Mary’s church around 1840. Probably acting in an ancillary role as an agent, in 1841 he was involved with the letting of Ranelagh Wharf and an associated house. He had become a Commissioner of the town by 1842 and also gave evidence in a dispute between Reverends John Craig and Robert Downes about dilapidations to the Old Parsonage involving over £175 (possibly a significant sum of £5,000 at 2021 values).

At the start of of his purple patch designing significant buildings in Leamington, he designed the two lodges for the Jephson Gardens at the entrance from the Parade in 1845 in Italianate style. In 1847 he was appointed as the architect for Leamington College which reopened in the following year. In the same year he completed the Vicar’s College in Priory Terrace for Rev John Craig, the remaining part is known as Gospel Hall in 2021. 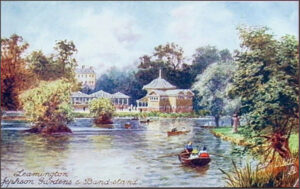 In the following year he was designer of the breakaway St Luke’s Congregational church in the style of the time of Henry VII in Brandon Parade, on the site of a coach factory. Ironically, he also designed an extension for the original Congregational chapel in Spencer Street.

In 1849 he advised on the level of Milverton Brook, he laid out land for housing in Tachbrook Road towards Whitnash and was also appointed as the Architect for the Town’s Commissioners.

He made improvements to the Regent Hotel, including a new portico on the Parade, in 1850, and also built St Luke’s church in Augusta Place.

He built the first chapel at the cemetery in Brunswick Street for the parish church in 1851 (demolished); two other chapels were later designed by John Cundall.  Squirhill was busy in this year and also made extensions and improvements to the Tennis Court in Bedford Street, including a new Doric portico, a hall and a card room.

In 1853 he designed the public hall for the Leamington Literary and Scientific Society in Windsor Street; some 30 years later this hall was a candidate to be used as the new town hall, but, of course a new one was eventually built on the Parade; the hall ended its days as a furniture depository and was demolished about 1960.

Public Hall, Windsor Street, when used as a furniture depository

He built the pair of semi-detached houses known as Osborne Place in Russell Terrace in about 1850, now Nos 43 and 45.

Mystery surrounds the large building on the corner of Willes Road and Russell Terrace. The facades on the two roads are similar; note that many details on the top of the facades have since been removed. The building on Willes Road has been known as Squirhill House and a sign in Russell Terrace names the area at the rear as Squirhill Place. The building is not shown on the Board of Health map in 1852. At the time of writing no evidence has been found that Squirhill designed this large building or lived there. 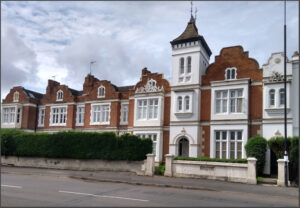 During his career Squirhill also designed several buildings in surrounding villages including the vault at Budbrooke church in 1839 and schools at Ufton and Harbury around 1853. The contrast in styles of these two schools is notable.

Sources
Thanks to Janet Ainley for assistance with family history