Pioneers of Esperanto in Leamington Spa 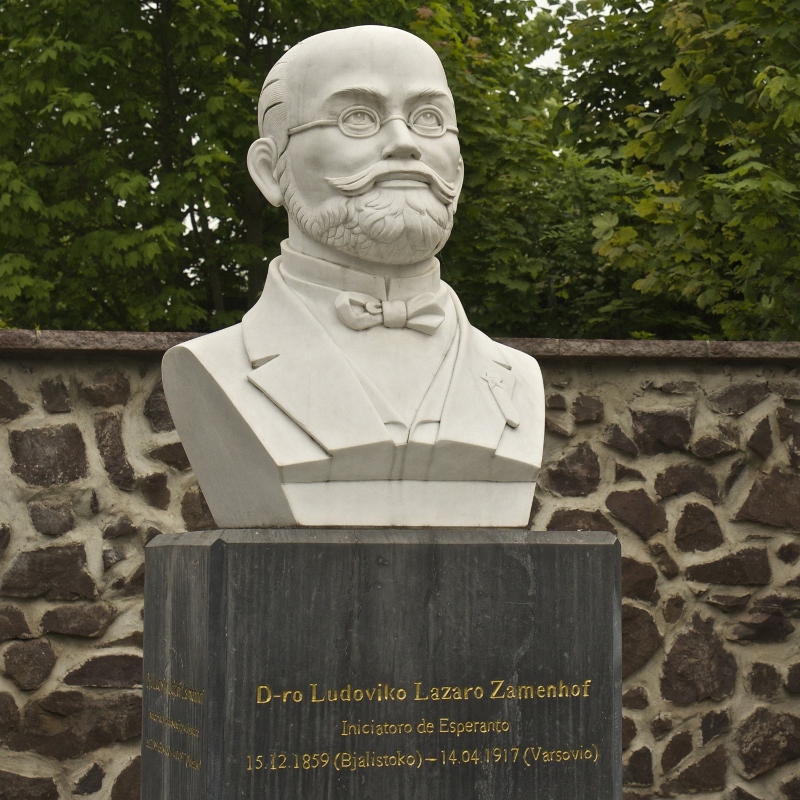 Esperanto is the most widely spoken constructed international auxiliary language. It was created in 1887 by Dr Ludwig Lazare  Zamenhof (1859-1917), an idealistic opthalmologist of Polish- Jewish extraction,  and its first adepts lived in the then Russian Empire. From about 1900 onwards, Esperanto began to gain adherents in Great Britain. The names and addresses of five early speakers of Esperanto in Leamington Spa, with their registration numbers are found scattered throughout the Adresaro de Esperantistoj [collection of addresses of Esperantists] between 1903 and 1907.

Here are the names of those Leamington pioneers of over a century ago:

Not much is known to me about some of those listed, but it is possible to find traces of one or two. John Sibree was a scholar and translation of Hegel’s The Philosophy of History. John Harrison taught at a local school in the daytime and taught Esperanto at evening classes. The Leamington Spa Courier makes several mentions of Esperanto in the years before the First World War. The following extracts give a taste of a small but important movement.

HERE AND THERE. (By Bedouin.)

“O that those lips had language!” Cowper. 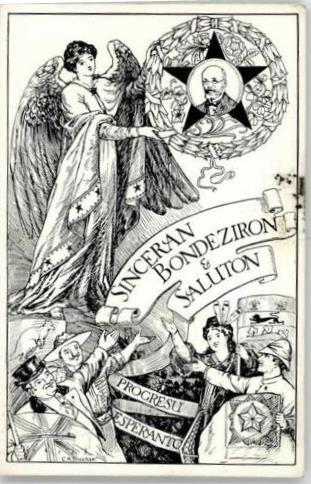 “Iron sharpeneth iron; man sharpeneth the countenance of his friend.” Nearly three thousand years have come and gone since the royal philosopher thus expressed himself. But the truth of the apothegm struck with fresh force the other day, when Mr. Alfred Edward Wackrill favoured me with a half hour’s conversation, during which we discussed Esperanto, the new universal language, its origin, its progress, and its possibilities. I must explain that Mr. Wackrill, late of Ceylon, where for 18 years he was engaged in the Survey Department, Colombo, is the son of Alderman Wackrill, one of our most esteemed burgesses and the Father of the Corporation of Leamington. He is an enthusiastic upholder of the Esperanto movement, and, fresh from the Esperanto Congress at Boulogne, he had much to tell me. He found a ready listener, his account of the great gathering being most inspiring, nearly constraining me to take paraphrastic liberty with the famous ejaculation of Agrippa and exclaim, “Almost thou persuadest me to be Zamenhofian.” (Leamington Spa Courier, Friday 1 September 1905).

“Esperanto: The Esperanto class which was opened at the Technical School on Tuesday evening bids fair to be a very successful class. Quite a number of ladies and gentlemen attended” (Friday 04 December 1908.)

The Midland Esperanto Associations held the first of their summer meetings at Leamington on Saturday. In spite the weather being somewhat threatening, a goodly number of Coventry, Birmingham, and Leamington” Samideanoj “spent a very pleasant afternoon and evening together. After an enjoyable tea, speeches (en la kara lingvo) were delivered, and all agreed that “la urbo de Leamington bone meritas la unuan pozicion en la Somera Pro gramo de Ekskursoj.” ( Friday 6 May 1910).

John Harrison. A Pioneer of Esperanto.

“We regret to record the death of Mr. John Harrison, of 114, Plymouth Place, which took place somewhat suddenly on Sunday last, as a consequence of complications setting in upon a chill. Deceased, who was 46 years of age, had not been very well for the previous fortnight, but some idea the suddenness of the shock which his death caused may be gauged from the fact that recently last Friday he was in fairly good health, and attending to his daily duties at Clapham Terrace Schools. Here Mr. Harrison had been engaged as teacher for the past 27 years, having had charge of the upper class in the boys’ section. … Perhaps Mr. Harrison will be remembered best for his work in connection with the study of Esperanto in Leamington. In fact, he may be said to have been the pioneer of that movement this town. Some five years ago he initiated an evening class for Esperanto, which class, though naturally limited in the number of its members, was very enthusiastic and entirely successful. Last season, however, the class was not held. Mr. Harrison was also a member of the British Esperanto Society and was the local Consul for that organisation.” (Courier, Friday 22 November 1912).

Esperantists in Conference in Leamington.

The Courier further reported: “On Saturday last the Midland Esperanto Federation held its sixth quarterly Conference at the Trocadero Cafe, when the Mayor and Mayoress, the Misses Donald, and Mr. Mellows (Director of Education) welcomed the visitors to the town. The Mayor said that he himself and all his family were linguists, and could, therefore, appreciate the advantages of communication with people of other countries, and knew something of the difficulties which Esperanto was designed to overcome. Undoubtedly it was an excellent thing to promote in any way a freer intercourse among members of different nations. Having travelled in many countries during his business career he did not think that Esperanto would become the language of commerce in its larger aspects, because he found the most successful way of doing business in a foreign country was to send a man who could speak to the people in their own tongue. He was sorry to say that in this respect British manufacturers and traders were behind those of other countries. Esperantists, however, had a very high ideal and their efforts in the social direction were calculated to be beneficial both to Esperantists themselves and to the world at large. He wished them every success, and would be pleased to do anything in his power to assist the movement Leamington. (Applause)”.

Mr. Mellows said that the Esperanto movement had very greatly interested him, not only because of its possibilities in regard to commerce and other material aspects, but because the higher aim which was the chief motive of Esperantists, namely, to promote good feeling among the nations, to enable different peoples understand each other’s thoughts and feelings, and thus realise how much they had common. In this way Esperantists believed that they were hastening the abolition of international misunderstanding and the furtherance of international peace. With regard to the educational aspect of Esperanto he, as an educationist, felt that it was a sad blot upon English education that only one language, as a rule, was taught at our elementary schools, and this language, English, many thought, was badly taught. (This comment provoked laughter). The teaching of additional language greatly increased the general intelligence of the child and its power of expressing thought in its own language Mr Mellows felt that it would be good thing if pressure could be brought to bear upon educational authorities to introduce another language into the schools, and that language possibly might be Esperanto. He was glad to say they had present Mr. Wackrill, Esperantist, whose father was the first Mayor of Leamington, and whose brother was a famous Esperantist, to whom was entrusted the final revision of the Esperanto version of the New Testament, which had just been published the British and Foreign Bible Society.

Mr. Wackrill gave an interesting account of how his brother came to learn Esperanto. As showing the facility with which it could be learnt, his brother acquired the language from one of the very imperfect text-books then available, but found on associating with other Esperantists that, thanks to the phonetic principle of the alphabet, he had the correct pronunciation and could make himself perfectly understood. (Applause). At 7 p.m. the President opened the business meeting with a short address, in which he alluded to the loss which the Esperanto movement in Leamington has sustained in the death last winter of Mr. John Harrison, an experienced Esperantist and secretary and teacher of the local classes. The chief item of interest in meeting was the decision to hold the next Conference in Bugby in January next. A social evening followed, in which, at intervals, a short programme of recitations, etc., in Esperanto and English was ably presented by Miss Payne, of Leamington, Mr. A. J. Morgan, and Mr. T. Heise, of Coventry. The Conference was considered to be success in promoting the objects of the Federation, which are to give opportunities for the exercise of Esperanto and the drawing together of its members in friendly intercourse. Mrs.Wormington, Vice-President of the Federation, was congratulated and thanked for the efficiency of the local arrangements. (Friday 26 September 1913.)

Did any of these enthusiasts pass on letters or postcards in the language to later generations? 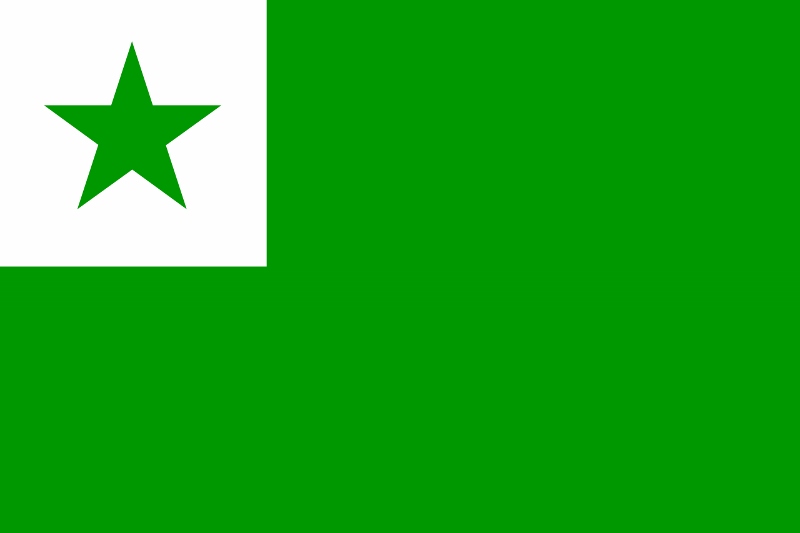