During the Second World War, the Free Czechoslovak Army (FCA) was based in Leamington Spa and a memorial fountain in the shape of a parachute in the town’s Jephson Gardens records their stay. It also commemorates one of the most daring undercover missions of the war which was carried out by Czechoslovak  paratroop agents.

The F C A arrived in Leamington in 1940 following the occupation of Czechoslovakia by the Nazis. The four-thousand military personnel were based in and around the town for two years. Their headquarters were in Harrington House, now demolished, a large Victorian villa a few yards from the park gates in Newbold Terrace.

While based in mid-Warwickshire, a small number of specially selected Czechoslovak Warrant Officers were sent to Arisaig in Western Scotland to be trained as paratroop agents by the British Special Operations Execuive (SOE). After a very rigorous training course, they formed a select group of men who were on standby to be parachuted into occupied Czechoslovakia to carry out sabotage missions and to support the Czechoslovak Underground movement. The seven men whose names are on the memorial were each members of small teams of paratroopers who were flown out from England at night in converted RAF Halifax bombers during the Winter of 1941/42. 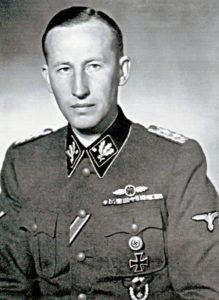 Four of those named on the fountain took part in the successful assassination of Reinhard Heydrich in a Prague suburb in May 1942. Heydrich was a close confidant of Hitler; head of the German Security Service and architect of the plans for the extermination of the Jews in Europe. He was seen by many Nazis as the natural successor to Hitler and was second-in-command to SS leader Heinrich Himmler. Hitler had appointed Heydrich the Reichsprotektor (Military Governor) of the greater part of Czechoslovakia. Czechoslovak military intelligence based in London decided that Heydrich should be eliminated and a plan, code named Operation Anthropoid, was drawn up to assassinate him.[divider]

The team spent many weeks in Prague lodging with members of the Czechoslovak Underground while they worked out how they might kill him. On the morning of 27 May 1942, his chauffeur-driven Mercedes staff car was hijacked by the Anthropoid team on a sharp bend in a road in the Prague suburb of Holesovice. Josef Gabcik levelled his sten gun at Heydrich from close range but the gun failed to fire and Jan Kubis who was the back-up man instinctively lobbed one of his two impact grenades into the car.

After a wild-west type shoot out, Kubis and Gabick managed to escape from the scene on foot and by bicycle and went into hiding in Prague in safe houses provided by JINDRA the Czechoslovak underground organisation. Heydrich was seriously injured by fragments of the exploding impact grenade and although he was speedily taken to a nearby hospital, he died of septicaemia on 4 June. His funeral was the grandest conducted by the Third Reich, orchestrated by Goebbels the Nazi Propaganda Minister.[hr]

The church of St Cyril & Methodius on Resslova Street in Prague, where the paratroopers were sheltered by the Czech Resistance

The men who had taken part in the successful assassination were at length sheltered in the crypt of the church of St Cyril & Methodius in central Prague along with colleagues who had been parachuted into the region on previous covert missions.Unfortunately, their location was betrayed to the Gestapo by a fellow Czechoslovak  soldier and at dawn on 18 June 1942. the church was besieged by seven hundred Waffen SS troops The paratroopers defended themselves until all of their ammunition had been used save for the last few bullets with which they each committed suicide by shooting themselves in the temple rather then being captured by the SS troops.

The killing of Reinhard Heydrich was the only assassination of a senior Nazi figure during the war.