Surcombe and Heard – Owners and Occupants of 21/60 Bath Street

The Surcombes came from the village of Lifton near Tavistock, Devon. William Surcombe married Mary Crocker and they had four children: Mary, Ann, William and Elizabeth who was born about 1766.

The signature of Elizabeth Surcombe the elder from the indenture of leasehold purchase of no. 21 in 1827

It is not known when Elizabeth Surcombe came to Leamington Priors but an early rate book of 1813 shows her as a tenant paying rates on property in Bath Street owned by the Wise family. She was a confectioner and pastry cook and carried out her business at what was to become 21 Bath Street. She also had interests in other land and property in Leamington Priors. The indentures regarding the property in Bath Street show that she took out a lease on the plot of land in June 1825. In 1827 she purchased the plot leasehold from the Wise family (Harriet Wise, widow of Matthew Wise snr, and their son, Matthew Wise jnr). She also owned a leasehold plot in Ranelagh Terrace from 1818 on which she built 2 messuages or tenements, and a freehold plot of arable farmland at Newbold Comyn.

The cottages occupied by Mr Wise’s labourers, shown on the plan of 1784, had apparently been demolished by 1820 and replaced by other buildings which were occupied by Elizabeth Surcombe. Buildings on the site also included an ice house and stables. On purchasing the plot she was ‘at liberty to refurbish or demolish the existing buildings and build new ones’. It was stipulated that any rebuilding or alterations Elizabeth wished to carry out in Bath Street were to be completed by June 1832 and there were instructions on the appearance of the buildings, the materials used, method of construction and type of utilities to be provided. One of the conditions of building on the plot was that if a spring were to be uncovered Mrs Surcombe was not allowed to exploit it in any way but had to cover it over. There were also instructions about the use of the premises, no activities which might cause a nuisance being allowed. She was allowed to carry out her trade of confectioner and pastry cook. It is not clear if Elizabeth actually did any building or alterations in Bath Street.

A picture of Bath Street in 1822 as Elizabeth Surcombe the elder would have known it. Her premises are not visible but were on the far right end of the street beyond the columns of the Parthenon.

In 1829 Elizabeth made her will and the executors and trustees of her estate were Edwin Woodhouse, draper of Leamington Priors (who had a shop in Bath Street), and James Thwaites, a sugar factor in London. He probably supplied her with one of the main ingredients of her trade.

Elizabeth never married although she called herself Mrs Surcombe, which was common practice for unmarried older women. She was an independent business woman and property owner.

She bequeathed to Hannah Heard the freehold land at Newbold Comyn and the ice well and all her china. All other personal estate and effects were to go to James Thwaites, John Russell and Edwin Woodhouse in trust for Hannah and Elizabeth the younger in equal shares. She instructed that the premises in Ranelagh Terrace be sold, mortgages paid off and debts paid and if there was anything left it was to be shared between her nieces as tenants in common. Bath Street was to be mortgaged, leased or demised to raise further money and to pay £15 per annum to Ann Surcombe, her sister in Devon, and to ensure that Elizabeth and Hannah could take over the remainder of the 99 year lease. If there was not enough money for the above then Bath Street was to be sold.

Elizabeth Surcombe the elder died on 18 July and was buried on 24 July 1830 at All Saints parish church, Leamington Priors. She was 64.

By that time the old town of Leamington Priors had fallen into decline as the new town developed north of the river. Elizabeth’s property at Ranelagh Terrace and the land at Newbold Comyn were put up for sale by auction at the Bath Hotel by her trustees. Ranelagh Terrace failed to sell at auction and was later sold by private contract to William Peace, wharfinger, for £1,000 out of which a mortgage debt of £800 was to be paid. The Newbold Comyn land was sold to James Hill for £520 which was paid to Robert Campion to discharge the mortgage on the land. This still left a deficit. The decision was taken to put Bath Street up for sale by auction at the Crown Hotel in one lot. This also failed to attract bidders and eventually James Hill, plumber, glazier and builder, offered to purchase the premises for £200 which was accepted.

The signatures of Elizabeth Surcombe the younger and Hannah Heard from the indenture of lease of 18 March 1834 after James Hill purchased the property.

Elizabeth’s nieces, Elizabeth the younger and Hannah Heard, continued to lease the premises and run the confectionery business. James Hill apparently wasted no time in demolishing some of the buildings and, having also acquired the adjacent plot, he built a block of 3 houses which were to be numbered 21, 22 and 23. Presumably while this was going on there were still premises for carrying on the confectionery business since there is no indication that this ceased at any time. Directories listed the business as Surcombe and Heard until 1857.

Elizabeth Surcombe the younger died at 21 Bath Street on 1 November and was buried on 7 November 1849 at the age of 41. I wondered if she had died of the cholera which swept through the area in the latter part of 1849, but this was not so. The last recorded case of cholera was at the beginning of October. Elizabeth died of a stomach cancer which had been diagnosed about 9 months prior to her death. The poor woman must have suffered greatly for nearly a year. She died at no. 21 and with her was Elizabeth Yems who was in fact her second cousin.

Hannah Heard, the remaining niece of Elizabeth Surcombe the elder, continued to run the confectioner’s business after her cousin, the younger Elizabeth’s death. The censuses gave Hannah Heard’s place of birth as Tavistock, Devon.

Hannah Heard was baptised on 9 April 1808 at Tavistock, the daughter of William Heard, a brazier, and his wife Mary (nee Surcombe). 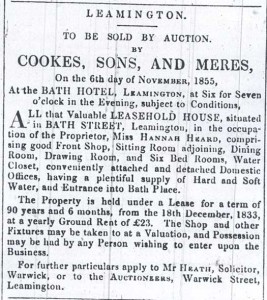 The advert which appeared in the local paper for the auction of no. 21.

In local directories the business is shown as that of Surcombe and Heard for several years after Elizabeth’s death. In 1855 the property was put up for sale at auction by James Hill. The outcome of this sale is not known but Hannah was still listed as a tenant of no. 21 and liable to pay rates in 1858. Surcombe and Heard are still listed as trading in the directory of 1857. She definitely wasn’t there by 1859.

In the 1861 and 1871 censuses Hannah is living at 6 Westbourne Place, High Street with members of the Yems family, including Elizabeth, who was present at the death of Elizabeth Surcombe. The Yems had married into a branch of the Surcombes of Devon but migrated to Greater London. The Yems sisters and Hannah Heard were second cousins. In the censuses they are described as lodging house keepers.

Elizabeth Yems died 21 June 1874 at Westbourne Place, Leamington, and the property was sold. Elizabeth’s sister Sarah and her cousin Hannah Heard were to be allowed to live there for as long as they wished. It was a lodging house so they occupied part of it and rented out the rest.

Detail from the 1881 census showing Hannah Heard at Forfield Place.

By 1881 she was lodging on her own at 5 Forfield Place. Under occupation it says rents so she owned property which she let.

None of these women, the Surcombes, Hannah Heard and the Yems sisters, married. They were all independent and earned their own living.