59 Beauchamp Avenue: A Short History of the House and its Residents 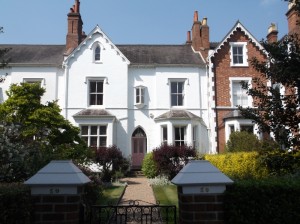 The house I grew up in, which we know today as 59 Beauchamp Avenue has not always been No. 59, or even Beauchamp Avenue. When the first plans for the development of this part of Leamington’s ‘New Town’ were made in 1825, the street was going to be called Newbold Terrace. When it was laid out in the late 1820s, however, it was called Beauchamp Terrace.

The first houses to be built were at the western end of Beauchamp Terrace (next to Clarendon Square). Holy Trinity Church was started in 1825 and a number of substantial villas followed, including in the block between Kenilworth Road and Arlington Avenue. In our block, Regency-style villas were built: Picton Villa (on the corner with Clarendon Street) in the 1830s and Stoke Villa (second after Arlington Avenue) some time later, followed by Mountford House on the corner with Arlington Avenue in the 1850s. The rest of the block (modern numbers 51-63) was not completed until 1863 by local builder Mr Mason, and local newspapers record them being occupied by residents for the first time between 1862 and 1864. When the block was complete the street was renamed Beauchamp Terrace East.

The first occupier of our house was Mrs Dixon and her daughter Helen, who moved there in 1864. Mrs Dixon was the widow of Henry Dixon Esq, a gentleman of property from Whittington, Derbyshire. He had inherited a substantial fortune based on a successful glassmaking business near Chesterfield, but was more interested in the life of a country squire than looking after the business. He built Whittington Hall and lived there in some style but was eventually forced to sell it and moved to Leamington where he died in 1859. As a result, our house was called Whittington Lodge from its beginning until the 1880s. In 1869 Helen Dixon married Henry Clarke from Leicestershire, and they lived at our house for about a year with Mrs Dixon. Henry Clarke had moved to Leamington to be an Assistant Master at Leamington College in Binswood Crescent. Henry and Helen moved to Oxford and ultimately Worcester, where Henry was a schoolmaster and tutor. Meanwhile Mrs Dixon moved to Sherbourne Terrace, Clarendon Street, where she lived until her death in 1874.

Miss Flint, age 48, came to live in Whittington Lodge in 1871, and was there for 12 years. Mary Louisa Flint was a lady of independent means from Leek in Staffordshire, where her father Charles had been a surgeon. Mary Louisa’s mother died when she was only two, and of her four siblings, three died in their thirties. Mary Louisa herself was severely disabled, being paralysed down one side from her thirties onwards. In 1883 or 1884 she moved with her surviving sister Elizabeth to a larger house at 41 Beauchamp Avenue (modern number), where she died in 1889.

We should not forget the servants, as for most of No. 59’s history, probably until just after the Second World War, there was generally a cook and a housemaid who lived in the house. Miss Flint’s housemaid was Eliza Smith from Staffordshire, who stayed with the family for her lifetime. Her first cook was Mary Marshall, who had also been with the family in Leek, followed by Emma Walker from London.

Beauchamp Terrace East became Beauchamp Avenue in 1873, and the house became No. 31.

The Corbett family followed Miss Flint in 1884. John and Clara Corbett previously lived in Narberth, Pembrokeshire, which was Clara’s birthplace. They had three children born in Narberth: Robert, Alan and Mildred. A fourth child, Arthur was born in our house in 1885. Mrs Corbett Senior also lived there; she was the widow of Rev Robert Corbett who had retired to Leamington and died in 1883 in Newstead House, Brandon Parade. Clara Corbett died after a tragic accident just before Christmas 1889 when her nightdress was set on fire by a gas stove in her bedroom. She appeared to be recovering but died of tetanus in January 1890. The following year John Corbett, who was also a local councillor, remarried, to Cecilia Betham, a widow and a champion archer from Ireland.  Robert Corbett was in the navy, became a captain and was awarded the DSO in the First World War. Alan never married, but Mildred married an electrical engineer from Warwick and lived locally. Sadly, Arthur, who was only four when his mother died, ended his days in the mental hospital at Hatton, where he died in 1924. Mrs Corbett Senior died in 1895 in Essex, and in 1898 the Corbetts moved to a house in Lillington Road.

The Rev Thomas and Mrs Jane Langhorne came to live at 31 Beauchamp Avenue in 1899, which they christened ‘Elsfield’ after Thomas’ previous parish of Elsfield near Oxford. Thomas was born in Musselburgh, Scotland, where his father was a headmaster. Jane was from Congleton in Cheshire. They came to Leamington in retirement, probably because of Thomas’ failing health. They had no children, but Jane’s niece Miss Agnes Firmstone lived with them. Agnes was the twelfth child of William and Frances Firmstone. William was a prosperous industrialist from the West Midlands, but both William and Frances died while Agnes was an infant. Agnes was brought up by Jane Langhorne, Frances’ sister, and she lived with the Langhornes for the rest of their lives. Both Thomas and Jane Langhorne died in our house: Thomas in 1903 when it was still 31 Beauchamp Avenue, and Jane in 1916, by which time the house had been renumbered 55 Beauchamp Avenue, when some Edwardian houses were built at the other end of the avenue. After Jane Langhorne died, Agnes Firmstone lived on at 55 Beauchamp Avenue until 1922. During the First World War she volunteered as a nurse with the British Red Cross. In 1922 she moved, first to a new house in Northumberland Road and later Heath Terrace. She died in 1955, age 80.

Mrs Abigail Starley was the next resident. Mrs Starley Senior was the widow of John Kemp Starley of Coventry, the celebrated bicycle manufacturer who is credited with the invention of the modern bicycle. He died in 1901 aged only 46 and their eldest son, also John Kemp Starley, took over the business. The Starleys had ten children altogether but they would all have been adults by the time Mrs Starley moved to Beauchamp Avenue in the 1920s. Her son Bertram, and probably her daughter Mabel lived with her. The house was still known as Elsfield during the 1920s, but during the 1930s was just No. 55 until 1934, when it finally became No. 59 after some houses in Beauchamp Square were incorporated into Beauchamp Avenue. It was probably during this period that the bathroom was put in to what was previously a large bedroom over the kitchen. Mrs Starley died in 1937 at No. 59. Miss Starley, her daughter, was living at 59 Beauchamp Avenue in 1938.

Another retired clergyman, Rev John Theodore Rogers, came to our house in 1939, and lived there until 1946. John Rogers was born in County Durham but was brought up in Accrington, Lancashire, where his father – also Rev John Rogers – was the vicar. John Theodore studied at Oxford University and married Leah Harper in Lancashire in 1886. They moved quite often around the country, and in 1911 John was Rector of Little Staughton near St Neots, Huntingdonshire, where Leah died in 1925. Their son John Martin Theodore was a student at Oxford University and later became Rector of Wymington, Bedfordshire.

In 1939 John Rogers, aged 78, was a widower, retired and incapacitated.  He had a live-in housekeeper, 70 year-old Ellen Strain, and one domestic servant Marian Watkin. John died at No. 59 in 1946 aged 86. Denis and Dorothy Brooke were the next residents, and lived at No. 59 for 17 years, from about 1946 to 1963. Denis was from south London, where his father Leonard was a wool merchant. At the start of the Second World War Denis and Dorothy were living in Cardiff, where Denis was a commercial traveller in men’s hosiery. Tracing their children has been difficult, but I think they had a daughter Diane born in Cardiff and a later son.

A ‘granny flat’ was created in No. 59 at this time; the spare room became a kitchen and the dressing room off the master bedroom became a shared bathroom with a new door on to the landing. Presumably the front (east) bedroom became a bedsit. Elizabeth Marsh recalls that this was for a grandmother. The garage was also built after the war. Diane Brooke married Charles Rolleson locally in 1961 and so is probably the second person to have been married from No. 59 after Helen Dixon almost one hundred years earlier. Diane may still be alive. I don’t know where the Brookes moved to after Beauchamp Avenue, but Denis died locally in 1990 aged 82.

Finally, in September 1963 my parents, John and Elizabeth Marsh moved to our house with their daughters Alison and Catherine. Three months later I was born in the Warneford Hospital. John and Elizabeth had lived in many different houses since their marriage in London in 1952, but most recently had lived in Blackheath. They came to Leamington following John’s appointment as consultant surgeon at Warwick Hospital, a post he held for twenty years. They lived together at No.59 for more than forty years, and following John’s death in 2004 Elizabeth has continued to live there for another 14 years, making them the longest staying residents of No. 59 by far.

This survey of births, marriages and deaths at No. 59 would not be complete without noting that since 1963, both Marsh grandmothers died while staying there: John’s mother Dorothea Marsh in 1967, and Elizabeth’s mother Jean Catherwood in 1987

Both Alison and Catherine Marsh were married from No. 59 at St Paul’s Church, Leamington: Alison to Chris Walley in 1981 and Catherine to Richard Weston in 1982. Most people are not born at home any more, so two family members were born in local hospitals: Simon in the Warneford Hospital, 1963, and Joe Marsh in Warwick Hospital, 2000

For the last 55 years, 59 Beauchamp Avenue has been a happy home and place to visit for Marsh children, grandchildren and great-grandchildren, a tribe at the last count of twenty people: