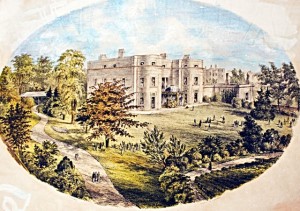 Beech Lawn, “Dr Jephson’s splendid mansion” once stood at the corner of Warwick Street and Dale Street. Designed by a local architect, William Startin, it was built by a workforce of 140 in 1830-31 for the Leamington doctor, whose advocacy of a plain diet, exercise and the taking of the Leamington waters made the Spa famous and steadily attracted a wealthy and influential clientele to the town.

The house stood in 3 acres of grounds between Dale Street and Grove Street, and already by the time Dr Jephson moved there in October 1832, its assessed value was reputedly higher than that of the Royal Pump Room and Baths. It was a substantial residence, as befitted the “Father of the Spa”, with a double drawing room, large dining room, library and business room, 14 bedrooms, 3 dressing rooms, 2 staircases, extensive domestic offices, larders and cellars. In addition, there were coach houses for 3 carriages, stabling for 5 horses, greenhouses, fruit-houses, and extensive gardens. (Sales particulars, Leamington Courier, 14th June, 1879). As Dr Jephson saw patients at home before and after undertaking his hospital duties, the business room was probably also his consulting room. The Gardener’s Magazine (1840), described in detail the gardens of Leamington, commenting that: “Dr Jephson [has] some beautiful specimens of Turkey and Luccombe oaks at his house, Beech Lawn”. (Lyndon Cave, (Royal Leamington Spa, Its History and Development, 1988) quoting Dudley, quoting an article in the above publication.)  Beech Lawn was built to accommodate a large family and a considerable number of servants. Census returns show that the Jephson household was run by a fleet of servants, – a Cook/Housekeeper, a Butler and a Footman, a Lady’s Maid, 2 Housemaids and a Kitchen Maid. Coachmen and Garden Staff were most likely “dailies” and lived out.

Sadly, Dr and Mrs Jephson never had the traditional, large, Victorian family to exploit this wonderful house to the full: they had only one son who died in infancy. The Jephsons were a very sociable couple, entertaining a great deal, and for much of their married life, Mrs Jephson’s oldest unmarried sister, Sarah Geldart, lived with them, as from time to time did some of Dr Jephson’s nephews and nieces. Sarah died in 1872, Mrs Anne Eliza Jephson in February 1874, and Dr Jephson in May 1878. Beech Lawn, a farm at Radford Semele, its stock and crops were bequeathed to James, his nephew, – and promptly sold.

The gardens were auctioned separately for development, to become the Victorian/Edwardian houses on Grove Street and Dale Street, and in September 1879, Beech Lawn became a Ladies’ College, run by the Misses Brown. From 1886 until 1896, it was known as Beech Lawn Ladies’ College and High School. In 1897, C.G.C. Mallam, Esq, M.A. took over and the school became a boys’ Preparatory School. Owners and staff – and the name – changed many times over the years, but until 1935 the house remained a boys’ Preparatory School, known as “Greyfriars”, Beech Lawn, Leamington Spa.

Beech Lawn was demolished in 1938, and in WW2, the abandoned grounds were requisitioned by the armed forces. Vehicles and equipment were stored there, patrolled by armed soldiers in uniform, much to the delight of small boys who lived locally. At least two of those small boys climbed the perimeter walls to catch a glimpse of a huge cement-based reservoir built to store emergency supplies of water pumped up Dale Street in long pipes, from the River Leam. However, they were not brave enough to go into the air-raid shelters set into the former garden walls fronting Warwick Street, where the ground sloped in steeply from the road.

The site was redeveloped in the 1960s to become the Fire Station and County Fire Headquarters.

Miss Mary Browne of Beech Lawn, Leamington Priors, sold Thomas Mason, builder, a piece of land for housing on Grove Street for £657 on 1st August 1879. The house was to be set back and the designs approved by Miss  Browne and her agents.

A house was built on the southern part of the land and sold by Thomas Mason to Eliza Cotton on 22 June 1881.