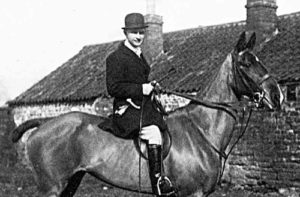 Charlie Johnson Payne never had any formal training in art nor did he ever exhibit a painting at the Royal Academy. That said, he was blessed with natural artistic ability and was described by his biographer as one of the leading equestrian artists of the first half of the twentieth century alongside such eminent practitioners as Sir Alfred Munnings.

Christened Charlie, he was born on 17 January 1884, the fourth of eight children of Ambrose Johnson Payne a Leamington boot maker with a shop at 45 Bath Street, Leamington. Ambrose had previously worked as a photographer’s assistant and had artistic and musical leanings. As a boy, the young Charlie was slight of stature and rather delicate-looking and as a consequence he was frequently bullied by other lads. In later life he looked back philosophically on these boyhood experiences and admitted that although he had hated being picked on, he thought that it had in many respects toughened him up. At an early age he developed a fascination with soldiers and horses and all things equestrian which he attributed to a visit with his school mates to the annual review of the Warwickshire Yeomanry on the Common at Warwick. His great uncle, who was a veteran of the Crimean War, fired Charlie’s youthful enthusiasm for all things military by recounting stories of Alma, Inkerman and Balaclava. At about the same period, he discovered the writings of Rudyard Kipling and commenced a lifelong love affair with Kipling’s verse. At the age of fifteen and on the outbreak of the Boer War, he tried to enlist and although he added a few years to his age on the Declaration Form, the Attesting Officer could see from his youthful appearance and slight build that he was clearly under age and sent him away with a flea in his ear and the comment ‘Go back to the nursery lad’. 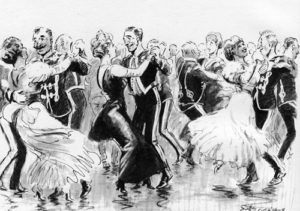 His teenage years were very difficult and unsettled. His father gave up the Bath Street business to become the licensee of the Plough Inn at Banbury and Charlie got a job as a clerk with a local wine merchant and went into digs with his elder brother Norman in George Street, Leamington. His fascination with the Army grew as did his interest in sketching and painting and at length he donned military uniform as a schoolboy cadet with the 2nd Battalion of the Oxfordshire Light Infantry. Aged eighteen, he joined the Royal Garrison Artillery as a Gunner/Bombardier and his artistic talents blossomed during his comparatively brief Army career.

Charlie completed his three years with the colours in May 1905 and was placed on the reserve. There followed several lean years during which he was very hard up and made a living of sorts from his pencil and brush signing his work ‘Snaffles’. In 1907 he started to submit illustrations of hunting characters to the monthly magazine The Bystander and later to The Illustrated Sporting and Dramatic News magazine. It was in 1914 in the early months of the Great War that he established his career as an artist and his work was in great demand. 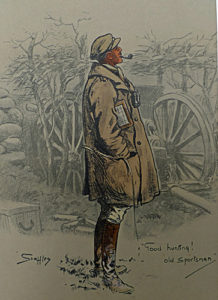 He was sent out to France by The Graphic magazine as one of a small team of freelance artists covering the fighting on the Western Front. During this period his work matured and his technique advanced, due in part to his having to work under the pressure of strict deadlines for the first time. His pencil and pen and ink sketches for The Graphic show a new confidence and a bolder use of line. His photographic eye served him well and his attention to detail was incomparable. The watercolours that he painted in France were widely produced as prints which he and his two sisters hand coloured.

In November 1915 Charlie married Lucy Georgina Lewin the daughter of a retired Exmouth sea-captain and Lucy took over Charlie’s finances and the management of his affairs to his great relief. After the war ended he travelled on the continent and in India painting and providing his London agent, the Fores Gallery in Piccadilly, with many memorable pictures of British Army life in India which were eagerly sought after.

Back in England he bought a hunter and a top hat and rode out with the Cottesmore Hunt. His illustrations of the hunting field and country sports were and still are the most collected of any British artist.

A National candidate, 1932 painting of horse & jockey in the parade ring

During the Second World War he continued to paint but failing eyesight meant that he produced few works in his declining years. Unfortunately, he suffered the loss of most of his effects by a fire caused by enemy action but then had a much greater misfortune when during the V. E. day celebrations in Taunton in 1945 a carelessly-thrown firework destroyed the warehouse containing all Charlie’s pre-war sketch books, original paintings and prints. He and Lucy spent their last twenty years at Orchard Cottage, Tisbury in Wiltshire where he died on 30 December 1967 at the age of eighty-three. 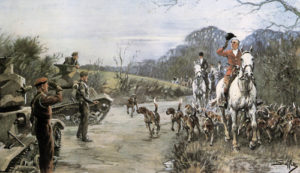 The Season, painted 1940, shows the Master of a hunt returning the salute from an Army Officer

His biographer speaks eloquently about the essential humanity of the little man from Leamington Spa,
“He remained what he always was, a simple, loveable man; he remained modest and retiring. He had given pleasure to thousands all over the globe ; his name lives and will continue to live in his paintings and in the midst of all who love sport and laughter, and in the affectionate memories of all those, young and old who knew him”.
Amen to that. RIP Charlie Johnson Payne better know as “Snaffles.”

A Half Century of Memories by Snaffles, Pub.Collins 1950

Print of The Gunner from Alan Griffin’s personal collection