Flavel’s Part One of two

This follows the firm from some early members of the Flavel family to the time when
Sidney Flavel junior took the reins from Sidney senior.

The history of the Flavel family in manufacturing has been traced back over three hundred years. After that the firm was steered by members of that family in Leamington for nigh on 140 years. It is a long and quite complicated story involving this family of strong personalities. Reports differ on a number of facts and we have relied on contemporary sources when readily accessible.

The earliest confirmed report is that William Flavel ran a business in the middle of the seventeenth century in Bilston in the Black Country, a couple of miles east of the centre of Wolverhampton. He made armouries, including gunpowder, which was a profitable industry in that time of frequent warfare.

A descendant, John Flavel (1754 to 1834), was recorded running a metal-working business in BIlton near Rugby and he was also an armourer as well as a smith. It is said that this business began in 1777.

A son of John, another William Flavel (1779 to 1844), was trained in metal working by an uncle in Coventry. It appears that he was ambitious to take advantage of the early growth of Leamington and moved to a house and workshop at Gloucester House in Church Street (on the corner of Gloucester Street) in the town in 1803. It is said that his unique idea was to make Russian vapour baths to complement the mineral water baths in the town. Sadly that idea did not flourish despite the approval of a Russian visitor, Major General Sabloukoff although William did advertise a vapour bath at Hygeia House in Bath Street in 1832.

In 1828 William attempted to heat the Episcopal Chapel (Christchurch) with coke with little success. Sadly, there was a flirtation with bankruptcy in that year. However William persevered with the business. Despite the setbacks he patented a new design of fire-grate in 1829. He established a showroom opposite the Old Well in Bath Street at this time; this was later listed as 47 Bath Street. It was probably later called Hygeia House. It is likely that the Bilton premises closed when father John died in 1834.

The big breakthrough for the firm came when William designed and constructed The Leamington Kitchener range around 1830. Primitive cooking ranges existed from the eighteenth century and around 1800 Count von Rumford (born Benjamin Thompson in USA) proposed the “range” to reduce the waste of fuel and to prevent chefs being burned when using open hearths. His design was a brick range enclosing fires with openings for placing pots. Each of the individual fires could be controlled and each of the openings could be closed. The next development was to replace the brick parts with cast iron panels to suit the range to a domestic situation. The Kitchener was such a range made from cast iron and which consumed solid fuel. It is uncertain whether Flavel ever formally patented this design. It is likely that components were made at various foundries including Bilton, Emscote and even Mansfield. The largest unit was said to replace five fires and two cookers.

Unfortunately Wiliiam had an emotional time leading up to the year 1832 because by this time his wife, his sons John (age 19) and William (age 24) had all died.

It is often reported that William moved to Eagle Foundry in Ranelagh Street in 1833. In fact this foundry was occupied by Smith, Taylor and Co, iron founders at this time and later by Radclyffe and Co for many more years. Flavel did not move to Eagle Foundry until 1856 when Sidney senior advertised the move. From 1833 until 1856 Flavel’s occupied premises in Augusta Place at the rear of the Tennis Court (now the Real Tennis Court).

The Kitchener was something of a sensation and William soon took to placing advertisements warning the public about copies of his design. Radclyffe’s however also advertised a Kitchener. William later opened a

showroom at the corner of Dormer Place at 35 Lower Union Parade in 1839 and the firm later vacated the Bath Street premises in 1847.

William attended Mill Street chapel which was on the site of what is now Urquhart Hall and he was buried in the churchyard at the rear in 1844. The ornate white gravestone is still present.

Sidney Flavel senior (1819 to 1892) ran the firm from 1844, when he was 25, on the death of his father William. The business was known as Sidney Flavel and Co from 1844 and it was incorporated in 1917.  Sadly Sidney too struggled in his early years and he faced difficulties in paying debts in 1847.

He continued to produce The Kitchener and was rewarded with one of only 19 trophies at the Great Exhibition in the Crystal Palace in Hyde Park in 1851. Queen Victoria herself had a Kitchener installed at Kensington Palace. Sidney also established a London showroom around this time. Sidney senior moved the business to the existing Eagle foundry in 1856 and an advertisement states that they left Augusta Place and Emscote foundry at this date. The Eagle Foundry was immediately to the east of Ranelagh Gardens and was accessible from Clarence Street and the Warwick and Napton Canal. The drawing dated 1867 corresponds well with a map of around 1890.

Flavel was producing around 30 Kitcheners each week in 1859 and the firm employed about 100 workers. Incidentally a Kitchener remains in situ at the Lord Leycester Hospital in Warwick. Sidney bought out his partners around 1867 and his son, who we will name Sidney junior, became the only other partner at the age of about 20. Sidney senior was in poor health for many years so Sidney junior ran the firm long before his father’s death. Sidney senior moved to Edgeville at Nos 24 and 25 Newbold Terrace in 1870. There is now a Blue Plaque in his memory on this house. The property at the rear is still named Edgeville Cottage. 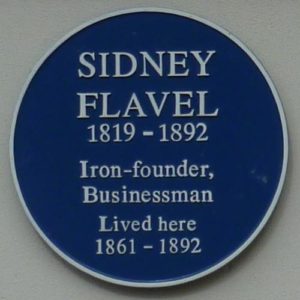