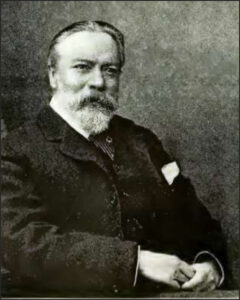 George Thomas “Metz” Robinson was active in Leamington Spa for only about a dozen years from 1855 to 1870 but he went on to be successful elsewhere in several fields. He did draw up some designs for buildings in Leamington but he had other interests and occupations including journalism. His journalistic career perhaps began in 1857 when he became the editor of the ‘Warwickshire Antiquarian’ magazine.

George was born on 13th July 1828 and baptised on 24th July 1828 at Isleworth, Middlesex.  His father, Richard Robinson, was born in Aldborough, Yorkshire in 1803 . His mother, Sarah was born in 1797 in Isleworth where they presumably married. After Sarah’s death, Richard remarried in 1869 to Jane Riman. The family moved to Staffordshire and Richard had become a prominent and respected builder in Wolverhampton by 1833, when daughter Mary Ellen was born. Richard set up a building business with his brother John in Wolverhampton. In the census in 1841, Richard was a stonemason, living with his wife in Wolverhampton. By 1851, Richard was listed as a retired surveyor, builder and town councillor in Womborne where he lived with his wife and two children. Richard died in Rowington,  in Warwickshire, about nine miles from Leamington, in 1881.

George went on to marry Frances Sparrow, daughter of a landed proprietor, James Sparrow and his wife Anne, at All Saints, Trysill, Staffordshire in 1856.  They were double-counted in the 1861 Census, with George, Frances and their two daughters, visiting his parents in Rowington, Warwickshire and also appearing on record at No 14 Milverton Crescent.  By 1871 his wife and children were living in Leamington in a lodging house in Portland Place, whilst George was boarding in Chorlton on Medlock when expanding a business partnership with a pupil, H J Paull in Manchester. This business was dissolved in October 1872.  The family then moved to London and George specialised in interior design, including several ocean-going liners; they travelled to Italy in 1880. George seems to have been intolerant of noise whilst he was working and he complained about street musicians outside his house, in court, in 1894!

George died on 6th May 1897 at home in Kensington, leaving £10,500 4s 11d to his wife, Frances. He also had a vast range of art works and a library of specialist books which were sold off after his death.

George’s two daughters had eventful lives and more about them is included at the end of this article.

At the start of his working life, George became a pupil of Hamilton and Medland, architects in Gloucester. After he had learned the rudiments of his profession, he entered practice in 1848 and designed several buildings around the country; he appears to have specialised in designing market halls, including at Montevideo in Uruguay. He seized the opportunities that he perceived for an architect in Leamington Spa and initially had offices at No 23 Upper Parade from about 1855 and, later, at his home at No 14 Milverton Crescent. In 1859 he moved his office to Priory Row, Coventry but in four years later he returned to Leamington and set up home at Orleans House in Warwick Street; this later became the home of the Conservative Association, and was renamed as the Windsor Club.

He acquired the nickname “Metz” when he was a correspondent for the ‘Manchester Guardian’ and he became trapped for 70 days in the siege of the city of Metz in north-east France in 1870 during the Franco-Prussian War. In the event, this siege ended with a German victory. During the siege he pioneered the use of small balloons to send messages over the walls and beyond the encircling armies. He wrote a book about the experience entitled ‘The Fall of Metz’.

George’s life in Leamington Spa. The achievements of George Robinson in Leamington Spa included the design of the new west wing of Warneford Hospital in 1856 and a couple of years later he vouched for the safety of a stand for 1,500 people which was erected in Kenilworth Road for the visit of Queen Victoria. In 1858 he was appointed architect for the Coventry Church Extension Society which was based in Leamington and, in something of a contrast, he wrote a book about the Military Architecture of the Middle Ages in 1859 which cited Warwickshire castles at Kenilworth, Warwick and Maxstoke as examples. The next year he designed the Sergeant’s House at the Rifle Butts at Milverton; it is surmised that this may be the house named Dragon Cottage in 2021 on Guys Cliffe Avenue, although the earliest date it bears is 1881. The house on this site is named as Range Cottage on a map of 1881-1890; it probably gained mock Tudor enhancements at some time during its life.

Dragon Cottage 2021, probably on the site of the Sergeant’s House, photo M Jeffs

In 1862 he wrote to the local press criticising the designs for changes to the Royal Pump Room. Robinson had submitted designs but they were rejected; he was critical of the Directors and not John Cundall who designed the final changes that were made. It is ironic that Robinson subsequently became architect for the company running the Pump Rooms and designed more of the baths.

He opened his home at Orleans House as a school for budding architects in 1863. In 1864 he was appointed as architect to the Diocese of Worcester. In that same year he was involved with the erection of the Iron Church at the corner of Portland Street and Warwick Street. St Albans Church was later built on this site; this new church was designed by his apparent rival, John Cundall. In the same year he designed a shopfront in Bath Street.

He designed the new balustrade along the front of the Royal Pump Room in 1865 and the adjoining balustrade for Victoria Bridge.

He opened a school of art at Orleans House in 1867. In the surrounding locality, at various dates, Robinson was involved with design work at churches at Brinklow, Long Itchington and All Saints in Coventry.

Both of his daughters were baptised at All Saints Church, Leamington, and attended University College, London. When the Robinson family moved to London, their home became “a central location for painters and writers”. Frequent visitors were William Rossetti, John Sargent, Robert Browning, William Morris, and Oscar Wilde. The daughters, Frances and Agnes, became famous as a novelist and a poet, respectively.

Agnes Mary Frances Robinson was born at Milverton Crescent on 27th February 1857 and was baptised on 13 April 1857.  She was a renowned poet. She had a romantic relationship with Vernon Lee (Violet Paget) but was eventually married in 1888, in Kensington to James Darmesteter, a Jewish professor at the College de France and moved to Paris, France. He died in 1894 in France. She then married Pierre Emilie Duclaux, a student of Louis Pasteur, on 30 December 1900 in Paris.  He died in 1904. She remained in France and her stepchildren moved her and her sister Frances to Aurillac for safety when war broke out where she remained. She died, a widow, in France on 9 February 1944.

Frances Mabel Robinson was born in 1858 and was baptised in Leamington on 17 October 1858. She started out intending to follow in her father’s footsteps by studying at the Slade School of Art – one of the few women at that time at the University of London but then became a renowned Victorian novelist, literary critic and translator, writing under the pen name of W S Gregg.   She never married. She lived in France and died there on 18 Jun 1954.

Special thanks to Stella Bolitho for research into George’s family history.