“A particularly fine and dashing soldier”

Harry Herbert Clarke was born in Canterbury in 1872, and enlisted in 1st (Canterbury) Troop, A Squadron, Royal East Kent (Yeomanry) Mounted Rifles at the outbreak of the 2nd South African [Boer] War in October 1899.

As newly promoted Corporal Clarke, he saw action at Colenso and Chieveley in December, where there was a good deal of interest in a newly commissioned officer, one  W  S Churchill.  In January 1900, Cpl Clarke fought at Ladysmith, and distinguished himself two weeks later under a three hour exchange of fire at the River Tugela. He was amongst the first to enter Ladysmith at the end of February, when he was again promoted to Sergeant, and awarded the Queen’s Medal with 6 bars.

On his return to England with his Squadron, Harry Clarke returned to work alongside his father as an engineer at Kent County Pavilion, continuing to serve with the Yeomanry as Captain. In 1902, he married Edith M Hughes. They had a daughter, also named Edith, and in 1907  moved to Greatheed Road, Leamington, where their son Jack was born in 1911. H H Clarke opened a Motor Engineering business at 1 Clarendon Square, and moved to live at no 2 Clarendon Square in 1912.  Harry’s business continued to flourish, but sadly, only a few months later, little Jack died in June 1912, aged 16 months.

At the outbreak of war in 1914, although then aged 43, Clarke volunteered and was commissioned as 2nd Lieutenant into B Squadron, 6th (Iniskilling) Dragoons [the 6th ‘Skins’] at Aldershot.   The 6th Skins saw action during the 2nd Battle of Ypres, and in September 1915 Harry Clarke was promoted to acting (Hon) Captain.  Four months later, in January 1916, he was Officer in Charge, Escort Troop to 3rd Army Corps.  Later that year, he was in action at Flers- Courcelette on the Somme, and at Cambrai.  By 1918, prior to the first Battle of the Somme, his regiment had been transferred to 7th Cavalry Brigade.  He was wounded during this period, and contracted trench fever at Delville Wood. 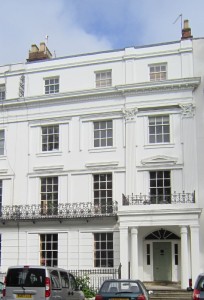 He was sent home on 3 months’ sick leave, and appointed Munitions Area Dilution Officer to the Ministry of Munitions in Birmingham, pending his return to full fitness and active service. Unfortunately, he relapsed soon afterwards and was admitted to Beaufort House Nursing Home, Clarendon Square, where he died on Sunday 14 July, of a combination of chronic meningitis and an epileptic attack, aggravated by trench fever and wounds received under fire. 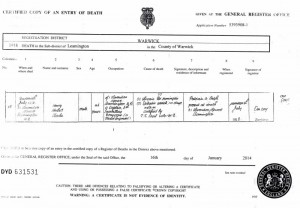 The Leamington Spa Courier’s obituary claimed that “Captain Clarke was well known all over England as a daring and skilful motorist as well as a practical engineer.  He was also a crack rifle shot”.  The Kentish Gazette described him as ” a particularly fine and dashing soldier”. Although Harry Clarke was given a full military funeral and buried in Old Milverton Cemetery close to his son Jack, and he is commemorated in Canterbury, his name was never added to the Leamington memorial in Euston Square.  This may be because his widow and daughter had moved back to Kent before the Leamington memorial was erected in 1921.  I am happy to record that H H Clarke’s name will shortly be added to the Leamington cenotaph.