Nathaniel Hawthorne was an American novelist and short story writer. In July 1853 he was appointed US consul in Liverpool by President Franklin Pierce, and during the ensuing 5½ years in England spent 2 periods in Leamington, in 1855 and 1857. At the end of his term of office, the family toured France and Italy, returning to Leamington in 1859. On this third visit the Hawthorne’s rented 21 Bath Street from 5 October 1859 until 22 March 1860. The house belonged to a Mrs Maloney who rented it out as lodgings, sometimes also living there herself. This short period in the house’s history (possibly from about 1858 when Hannah Heard ceased trading as a confectioner until late 1860) is the only time it was used solely as a home and not business premises as well.

Nathaniel Hawthorne was born in 1804 in Salem, Massachusetts, into a prominent local family. His father was a sea captain who died when Nathaniel was four years old. His literary talent was recognised by his mother’s family who paid for his education at Bowdoin College. There he met future prominent literary and political figures who became lifelong friends. Among them was Henry Wadsworth Longfellow and the future President of the United States, Franklin Pierce. After graduating from college in 1825, Nathaniel spent the next twelve years at home writing, mostly short stories or tales.

Through his friends he obtained employment in various government offices to help him supplement his income. It was also with the help of friends that his early works were published. The first of these was a collection of his short stories entitled ‘Twice Told Tales’. In 1842, he married Sophia Peabody, who was a great admirer of his work. It was not until 1850 that his first and most influential novel was published, ‘The Scarlet Letter’. Other novels followed.

In 1859, the Hawthorne household consisted of Nathaniel, his wife Sophia, children Una, 15, Julian, 13, and Rose, 8, a nursemaid and a governess. They could all easily be accommodated at number 21, a four storey house with a basement where the kitchen was situated.

Sophia Hawthorne kept a diary which gives some idea of what it was like to live in the house at that time: ‘We have taken apartments in an unfashionable part of this fashionable Royal Spa, but the rooms are pretty comfortable, excepting that we are close upon the railroad and have constant thunder, though no screams of the steam demon’. Later she notices the inconveniences: ‘All the housekeeping very difficult here. Up and down stairs so much.’ *

Nathaniel found Leamington ‘a very pleasant town with many conveniences for transitory residents’. However, their stay in 1859/60 was in the winter and he wrote: ‘Leamington is not so desirable a residence in winter as in summer; its great charm consisting in the many delightful walks and drives, and in its neighbourhood to interesting places’, and on 16 Dec 1859 when it had snowed: ‘the muddy old Leam is covered with ice thick enough to skate upon’. It seems that morning ablutions were performed in cold water – Nathaniel says ‘my bathing tub frozen over’. *

On 25 Jan 1860 Una writes of a good homeopathic doctor and also of her and her mother’s treatment by a dentist when Una had a perfectly sound double tooth extracted because it was too near some others, and Sophia writes that she had a wisdom tooth extracted and four filled, one of them a difficult and painful affair

In February 1860 nearly everyone in the household was one by one struck down by ‘a very strange eruptive disease which puzzled the doctor and which we are sure was caught of a very dirty and diseased housemaid who went off to the hospital from here’. * (There was an outbreak of a ‘disease of the skin’ treated by the waters at the hospital. There was also an outbreak of smallpox at the end of 1859/beginning of 1860.) 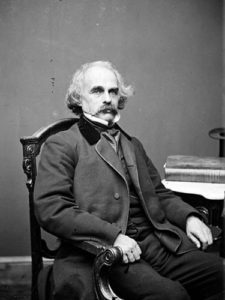 Nathaniel Hawthorne in the early 1860s, shortly after his stay in Leamington.

Nathaniel spent much of his time at number 21 writing his last novel, ‘The Marble Faun’, and Sophia comments on his progress in her diary. This was published on their return to America. Within a couple of years Nathaniel’s health began to fail and he died, it is thought of stomach cancer, in May 1864 aged 59, in Plymouth, New Hampshire.

After the departure of the Hawthornes, number 21 had occasional tenants but was sometimes empty until towards the end of 1860, Robert William Collier began trading as a draper.

In the 1850s Hawthorne lived for a time at 10 Lansdowne Circus and a blue plaque recording the fact is attached to this house.