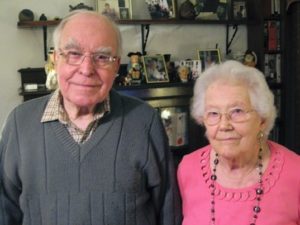 The best known name for stonemasonry in this area is Pullin.  The business, situated in High Street next to the railway bridge, still bears the Pullin name even though there is no longer a family connection. George Pullin started the business in 1875 in King’s Heath near Birmingham and his son, Charles inherited it.  Charles moved to Leamington Spa in 1910 for health reasons and his first premises were in Bath Street, (now Ace Caterland).  He was a widower and moved into Beaconsfield Street with his  young son and daughter.  The family attended St Mary’s Church and it was there that Charles met Mabel Smith, a Sunday School teacher.  They married at St Mary’s in 1916 and four years later Raymond was born. The family were active members of St Mary’s Church Leamington where Ray later sang in the choir.

After leaving Central School in Leicester Street (now Campion School, Sydenham) Ray was apprenticed to  the architect Frederick  Cundall, after which his father insisted that he join the family business.  He was unhappy with the dirty, dusty work but this was curtailed by the outbreak of World War Two.  Ray joined the Royal Navy and was based in Scapa Flow and the Mediterranean where he was involved in many operations.  He gained promotion, becoming First Lieutenant in 1943.  After the war his last commission was at Saltash, near Plymouth where he was commanding 45 men who were working on maintaining old naval ships. 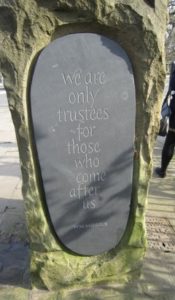 On his return to Leamington, Ray at first thought of applying for other jobs but decided to return to the family business, which pleased his father enormously.  He never regretted it and his workmanship can be seen far and wide and did not only involve gravestones. Examples in Leamington, to name but a few, can be found on the Spa Water Fountain, the Jephson Garden gates on Newbold Terrace, the Midland Oak Memorial, the War Memorial in Euston Place and the Town Hall plaque which was unveiled by the Queen in 1988.  Ray also had commissions in London, Yorkshire, Kent, Cambridgeshire and Hampshire. The business prospered and between1949 and 1961 Pullins took over the other stonemasonry companies in Leamington – Rathbones, Aldridges and Checketts. Ray sold the business in 1978 but continued to work as a Consultant.

In 1947 Ray married Eileen Wilson whom he first knew at school. They lived in Leamington until moving to a cottage in Offchurch in 1971, where Ray became a Reader at St Gregory’s Church.  They had one son who now lives in Paddock Wood in Kent and have grandchildren and great-grandchildren.

Ray’s activities outside work are too numerous to mention but he served the interests of Leamington on many committees, often as Chair, giving his time freely. He was the longest-serving Trustee at the James Hirons Care Home, retiring only after reaching his  90th birthday, never missing a fund-raising fete or a celebration. Ray was the youngest magistrate in Leamington in 1953 and one of the first ones to be appointed by the new Queen.  He enjoyed football and cricket and was a keen West Brom supporter. In recent years, as Ray and Eileen’s health started to fail they moved to Kent, near their son but the Pullin name will always be remembered in Leamington with the many gravestones, monuments, plaques, plinths and other memorials that were so lovingly and skilfully created.

This article is based on a talk I gave about six years ago to Sydenham History Group. It was compiled with his assistance, from Ray’s memoirs. 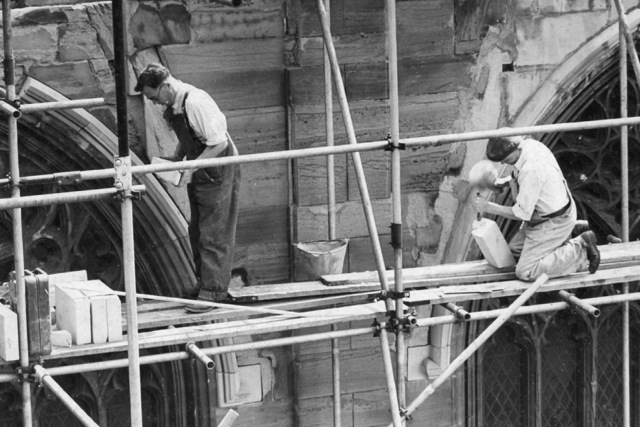 A Leamingtonian who literally left his mark on the town died recently at the age of 100. He was Raymond John Pullin, well known stonemason who was born on 23rd September 1920 in Beaconsfield Street.
Ray and his wife Eileen had a long and happy marriage, ending only a few years ago on the death of Eileen, in their care home in Hove.
Although the business in High Street still bears the name Pullin it no longer belongs to the Pullin family. However Ray’s name will live on in Leamington through the many fine examples of his intricate work.  K B