In common with all the other spa towns that existed in the first decades of the nineteenth century, visitors came to Leamington only during the summer months. The so-called ‘season’ lasted from April through to September. The reason for this is simply that most of the buildings at that period had no means of heating other than open fires burning coal and transporting coal in sufficient quantities to places distant from the pits was a major problem. It was the opening of the Warwick & Napton canal in 1799 that would bring about a fundamental change in the way that Leamington’s social calendar was ordered. For the very first time coal from Midland collieries could be unloaded in bulk from canal barges tied up at wharves in the centre of the old town.Local hoteliers and  the more affluent residents were soon getting regular deliveries of coal to their properties. The canal was to be an important factor in the subsequent development of the town.

John Mytton and his hounds

The distinguished travel writer and  acknowledged expert on spa towns  in  Europe, Dr Augustus Granville, visited Leamington in 1841 and in his book, Spas of  England Vol II, he commented on something rarely mentioned in subsequent histories of the town. Granville said… “The neighbourhood may be of the first water for a hunt; and that it is so the very progress of Leamington town testifies; for we must be of good faith and confess that hunting fully as much as water-drinking, has contributed towards that progress”. For the hunting fraternity in this part of the county, the availability of coal meant that in future there would not be a ‘close season’ in their social calendar. They could enjoy the thrill of the chase through the short winter days and in the evenings indulge themselves in whatever diversions might be on offer by enterprising local hoteliers and victuallers. Granville’s conclusion was borne out by reports in The Warwick Advertiser newspaper which reported that Lord Middleton had based his pack of hounds in Leamington in 1812. By the following year a number of fashionable packs were reported to be hunting locally. This made it a hunting centre with a winter season supplementing the normal round of summer distractions and Leamington became an entrenched hunting town. The Warwickshire Hunt Ball was the social event of the year in 1822 and a few years later the Duke of St Albans decided to make Leamington his winter abode so that he could hunt with the Warwickshire pack. The Duchess is reported to have said “Well your grace, If you can find amusement in the field for the day, I will endeavour to provide for the evening, and we will see if we cannot make Leamington as pleasant in winter as it is gay in summer”. By 1828 The Courier newspaper proudly proclaimed that no other watering place in the kingdom had greater attractions for the hunting gentlemen. Thus was the future of Leamington assured by the men in hunting pink. Or was it?

1824 advertisement for the Bedford

The original village of Leamington Priors was clustered on the south bank of the river Leam and comprised little more than a few half-timbered cottages, a small medieval church and a couple of rustic ale houses. The exploitation of the saline springs combined with the influx of wealthy visitors and residents soon led to a rapid expansion of the village and a frenzy of new building. The ‘new’ town was developed on the north bank of the river and this occasioned a gradual shift of the social and commercial life from the old Leamington Priors to the newly laid out streets of the already fashionable Leamington Spa. There were  several small hotels in the old town which was  where the majority of horses and livery stables were to  be found but it was abundantly clear that the rapid development of the new town over the river was where the future lay for those involved in trade and business of every sort.Some of the first houses built in the new town were the terraced properties erected in Union Parade (now Lower Parade); these were completed in 1811. Three of these houses owned by John Russell and Dr Amos Middleton were joined together to form the first hotel in the new town which opened in the same year and was named The Bedford Hotel. The choice of name doubtless influenced to some degree by the Russell family one of whom was the Duke of Bedford. The Bedford cost about £5,000 to build and furnish and the proprietors  were  John and Sarah Williams who had for many years been in service as butler and housekeeper to Bertie Greatheed at Guy’s Cliffe. Since the hotel was on land formerly owned by Greatheed, it might be thought that he too had put some money into the project or was at least consulted about it. The hotel opened on October 25th 1811 with a dinner attended by a hundred and twenty-eight members of the distinguished nobility and gentry of the county. The dinner, tickets for which were a guinea each, was according to The Courier newspaper ‘Abounding in excellent wine and every delicacy of the season, dressed in the highest slate of cookery’. The hotel was an immediate success and at the height of the coaching era in  the 1830’s it was a busy coaching stop with several coaches running each day to Midland towns and cities and the ‘Nimrod’ serving passengers travelling to London.Whilst still running The Bedford, John Williams purchased some stables, King’s Stables, opposite the hotel and in 1819 opened a second hotel the Williams Hotel which would later become The Regent Hotel. 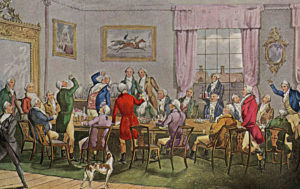 The Bedford had set out ‘ to provide for the accommodation of those who prefer the quiet and sober enjoyment of  a  family party to the brilliancy and bustle of a large assembly’. Unfortunately, the hotel was soon ‘adopted’ by a group of people, mainly men, who were looking for enjoyment of an altogether livelier and less sober variety. Enter the horse racing and hunting fraternity. The Bedford was the preferred place of residence for many during the hunting season and during the autumn steeple chase meetings held annually in Leamington and Warwick. The Warwickshire Hunt Club had a suite of apartments  and the hunting fraternity  formed their own exclusive Oyster Club which met at The Bedford throughout the winter months. When the steeplechase meetings were in progress, bookmaker set up their booths in the mews at the rear of the hotel and large sums of money were won and lost in betting.

Within a few years, the Bedford had become the favoured meeting place of a group of young and rumbustious sporting characters. Into this mix came a wealthy, eccentric Regency rake, Mr John Mytton, squire of Halston in Shropshire. Mytton indulged his enjoyment of horse racing and gambling and had hunted his own pack of hounds from the age of ten. Not for nothing was he known throughout England as ‘Mad Jack’ Mytton. His eccentricities and extravagant exploits were legion and well documented by the famous equestrian writer Nimrod (Charles James Apperley) in his Life of  John Mytton  published in 1837. ‘Mad Jack’s’ life was described as ‘a series of suicide attempts’. One such ‘attempt’ was carried out at the Bedford Hotel and has entered Leamington folklore. Whilst staying at the Bedford in 1826 and as the result of a wager, Mytton is said to have ridden his horse ‘Mad Tom’ up the grand staircase of the hotel, into the first-floor dining room and then to have jumped over the dining table and the assembled diners and then jumped through the open window into the street below. Such a crazy stunt was very much par for the course for Mytton but whether he succeeded in his attempt is open to question. That he rode up the stairs is not in dispute but The Annals of the Warwickshire Hunt suggest that he was ‘with great difficulty’ dissuaded from jumping ‘Mad Tom’ onto the Parade.  Needless to say such shenanigans and the drinking and gambling met with great disapproval among  local residents and with those who were trying to attract to Leamington  wealthy families whose primary motivation was to seek  ‘sober & quiet enjoyment. 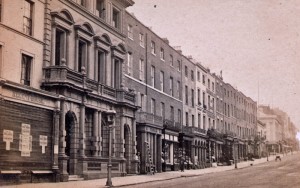 With the opening of the Regent Hotel and other hotels in the new town, the Bedford  Hotel began to decline in popularity and after many changes of ownership during its 45 year existence, it closed in 1856 when the building was demolished and replaced by a new building for the Leamington & Warwickshire Bank with a distinctive facade that survives to the present day. Interestingly, the first chairman of the new bank was a Captain Lambe who had himself been the owner of a famous steeplechaser ‘Vivian’ and the leader of the old Bedford Sporting Set.