Trams followed their steel tracks from Leamington Spa to Warwick for nearly fifty years. The trams are now a distant memory for only a few. The idea for a tramway was born when an Act of Parliament authorised the construction in 1879. The system was engineered by a local man, John Fell, and opened for business on 21st November 1881 and went for only three miles and a few yards. It ran from Station Approach off Avenue Road by way of Spencer Street, The Parade, Warwick Street and Emscote Road to the other terminus on High Street, Warwick, between the Warwick Arms Hotel and Lord Leycester’s Hospital.

The cost to the Leamington & Warwick Tramways & Omnibus Company was £14,800, equivalent to about £2 million in 2013. Two leading entrepreneurs in the tram company were well known Leamington men and the first trams were therefore nicknamed “Wackrill & Bright’s Rattlesnakes”.

The route was mainly single track of standard gauge (4 ft 8½  in) with a number of passing places, including Victoria Terrace, Milverton Station and St Johns in Warwick. The tramcars were double-decked and were initially allowed to pass through Eastgate in Warwick (with no passengers on the top deck). Surprisingly, in a time with less regard for health and safety, the line was relaid after a very few months to avoid the arch and to pass to the south of Eastgate. However this would add to a later problem.

The trams were normally hauled by two horses but extra “pullers” were often used on steeper inclines such as The Parade and Emscote Road canal bridge. Over time there were six or seven tramcars from three different manufacturers and they operated with about 13 minutes’ headway. The depot and stables were in Coten End Warwick, opposite to the end of Cherry Street, very near the site of the small Sainsbury’s shop.

Brush Electric Traction bought the system in 1900 and Tramway Orders in 1900 and 1901 allowed conversion to operation by electricity from overhead cables. Track was relaid as double-track with a gauge of 3 ft 6 in and a power generating station was built on the Warwick side of the canal bridge on Emscote Road located on what is now Tesco’s supermarket. It relied on the canal for coal and the river for cooling water. Later this power station was to become a much larger plant which fed into the national grid. 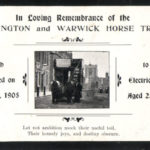 There was much sadness locally at the passing of the horse-drawn trams and a special “In Memoriam” postcard was printed. Some evidence of the horse trams survives. Horse Tram No 1 is now in the National Tramway Museum at Crich in Derbyshire in unrestored condition and Tram No 8 is in use at Beamish Museum in County Durham. Some trams were sold to Glasgow and one tram body was used as a pavilion at a bowling green at the power station.

The electric service started on 12th July 1905 and up to 12 Brush trams were available, six of which were second-hand and came from Taunton. A further tram was acquired in 1921. The depot was now on the land adjacent to the power generating station. 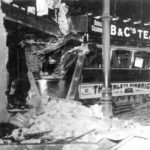 The Accident
(Windows on Warwickshire)

Sadly Tramcar No 7 was damaged beyond repair when it ran away from outside the Warwick Arms and crashed into the Castle Arms at the bend around Eastgate, Warwick, on 3rd January 1916 causing serious damage to the Inn. It is said that the conductor released the brake without realising that the driver had stepped off the tram. 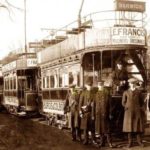 In 1912 the tramway company also provided electricity for lighting. It was purchased from Brush by Balfour Beatty and Company who rapidly expanded the lighting part of the company into the Midland Light and Power Company. The office of the company was at 14, The Parade in 1920.

By the Town Hall (postcard)

Unfortunately competition from more flexible omnibus services led to the end of the tram era with the last tram running on 16th August 1930. Tram No 11 was subsequently sold to the Llandudno and Colwyn Bay system. Many of the stands for the overhead cables were converted for use as lamp-posts, most notably seen in many postcards of The Parade. 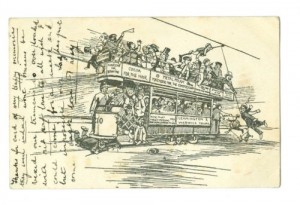 Further information and images can be seen on the website of  Ashley Birch,