Russell was in business on his own in Wise Street until he took on Edmund Mitchell as a partner around 1828. They adopted the name Russell and Mitchell and the partnership survived just 12 years until Russell’s death in 1840, after which Mitchell continued on his own at the same address.
READ MORE about Edmund Mitchell.

This John Russell should not be confused with a contemporary John Russell, owner of the Bath Hotel, who was active in Leamington Spa from 1828 to 1874. This Russell lived for many years in Church Walk.

Before the partnership was formed Russell planned a verandah and an extension to Newbold Comyn House for Edward Willes with Henry Hakewill around 1821 but it was not built.

One of their major contributions to the town was that in 1828 they designed the Roman Catholic church of St Peter in George Street. Prior to the building of this church Roman Catholics worshipped at the hall in Clemens Street and later at a room in Copps Royal Hotel (Mr Copps was a Roman Catholic). This church became redundant when the new church was opened in Dormer Place in 1868. The building is now a Seventh-day Adventist Church.

A couple of years later the partners designed extensions to the parish church.

Russell went on to design the new House of Industry (Workhouse) which replaced a warehouse between Court Street and Althorpe Street in 1832; it is recorded as having 14 bedsteads and 11 beds.

In 1833 there was a petition from the Commissioners urging Russell to return as Surveyor for the town.

In 1833 it is recorded that he designed ‘No 11 Church Walk’. This was probably the house on the corner of Bath Street and Church Walk which has been addressed as No 11 Bath Street for many years. It has had many occupants and in 2021 it is part of a public house named The Old Library; it is Listed Grade 2. 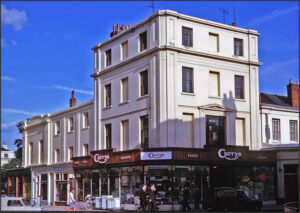 No 11 Bath Street, the four-storey house on the corner, when it was a retail shop for Currys

From about 1831 Russell was on the building committee which was planning a hospital in Kenilworth Street or Brunswick Street. Eventually a site was chosen in Radford Road and he was invited to be the architect but he declined the offer; Joseph Bateman was then appointed as the architect for the hospital which opened in 1834. At the opening Russell was singled out for  praise for his ‘disinterested’ (presumably unpaid) contribution to the project.

Russell designed the Congregational church in Harriet Street, now Spencer Street, in 1835. This is in similar Classical style to the church in George Street. In 2021 it is the subject of an application for conversion to offices as part of the Creative Quarter. 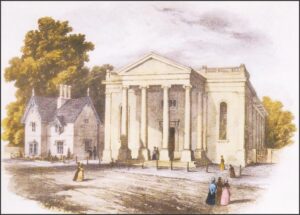 He was involved in a dispute about the mill in Mill Road in 1837 and designed the new bridge by the Mill in the following year. Replacement of all or part of this Mill Bridge was quite a frequent event following flooding of the river until the structure existing at the present day was designed by William de Normanville.

Thanks to Janet Ainley for biographical research