William Walden Hammond was born the youngest of three surviving children of James and Martha Hammond, in Middlesborough in June 1888.  James was an Auctioneer and Appraiser (perhaps now, a valuer,) but before long, he and his family had moved to Cambridgeshire, where he took on the role of hotelier and licensed victualler. Albert, Walden’s older brother, worked for his father.  Walden was passionate about photography and chose to start working life apprenticed to a photographic chemist. He immediately joined a photographic club, and these two interests set him up for a lifelong career.  Shortly before the outbreak of war in 1914, Walden married Charlotte Anne Fisher, a talented pianist and singing teacher. When war was declared, Walden tried several times to enlist but was turned down on health grounds.  Eventually, he secured an interview at the HQ of the Royal Flying Corps in London, and was accepted: he had all the qualifications for their fledgling aerial photography and research unit, and although his medical examination report said he must never fly, he pressed on.  He did fly, but not as a pilot.

The rest is history: he made his name in aerial photography during WW1, not just in photographing significant events and installations, but also in the developments he led, resulting in new systems and new photographic techniques. He took some of the finest reconnaissance photographs of the war, acknowledged for their immediacy and precision even today. 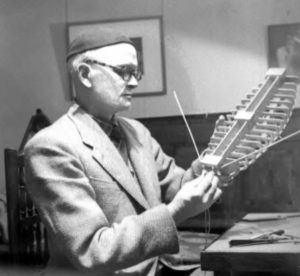 W Walden Hammond at work on a model plane

After demobilisation in 1919, Walden and Charlotte moved to Leamington, where he set up a photographic studio on the Colonnade, across the river from the Pump Rooms.  They threw themselves into the social life of the postwar Spa, becoming members of the Rotary Club and the Inner Wheel, supporting charity and social events.  Lottie, under her maiden name of Fisher, gave singing lessons and could be relied on for piano accompaniment, from children’s fancy dress parties to major social functions.  In 1921, moving on from the Leamington Amateur Photographic Society, formed in 1887, Walden helped to set up the Leamington and District Photographic Society, which still flourishes as the Leamington Spa Photographic Society, as a recent exhibition at the Parish Church will testify. In 1938, he donated an annual prize, the Walden Hammond Vase.  He was also a pioneer of the Operatic Society, and as a model aeroplane enthusiast he helped to found the Model Aeroplane Club.

Walden Hammond’s skills as a photographer set him apart: he quickly became the “go to” photographer of this area, offering studio portraits, portraits at home, wedding photography. He was called on to photograph society weddings far and wide, and in 1929, to capture the new Earl of Warwick, at the Castle, with his mother and younger brother.  He exhibited regularly in Leamington and the Midlands, at the London Salon, in Paris, and for the teens of years, at the Royal Academy, resulting in his Fellowship of the Royal Society.  His portraits often appeared in publications such as The Illustrated London News and The Tatler, – and at Christmas 1936, his study of a smiling clown graced the front cover of the latter.  The smiling clown in question was none other than ‘Morgan,’ chauffeur and right-hand man of the redoubtable Mrs Fowler of the Blue Café, and a copy graced the home of his daughter

and son-in-law, Pam and Peter Chater, until their deaths in recent times.

Walden also photographed local events: The Leamington Courier of January 20 1922 has splendid portraits of the protagonists of The Mikado, one of whom, the artist James Duggins, who was mentored by Walden Hammond, later became in his turn the ‘go to’ photographer in Leamington and District.

In the 1930s, the glamour of the spa had begun to wear thin, and there was much discussion in the press about how best to revitalise the town.  Walden Hammond was ahead of his time: he suggested in October 1934 that the disused Colonnade Theatre (now The Loft) should be repurposed for community use, and linked to an improvement scheme with a rustic bridge joining the Colonnade and the Pump Room Gardens.  An earlier scheme proposed by the Devis family, to convert the theatre into a swimming pool with a roof garden and café had been shelved, owing to the multiple restrictions placed on the development.  He would find it strange to imagine that eighty or so years later, the people of Leamington are still wrestling with the idea of forming a cultural quarter.

In WW2, Walden was Air Raid Warden in charge of South West Leamington, whilst Mrs Hammond supported the Old People’s Welfare Society at Rossmore.  When they retired in September 1953 and moved to Essex, the Courier paid tribute to both partners for their contributions to Leamington life during the thirty-four-year tenure at no 2 The Colonnade. Walden Hammond’s studies continued to attract publishers and exhibition spaces, and despite his having been rejected so many times for military service in WW1 because of a heart complaint, he lived on to the age of eighty-one, dying at Buckhurst Hill in January 1970. Mrs Hammond died in Suffolk, in 1973.